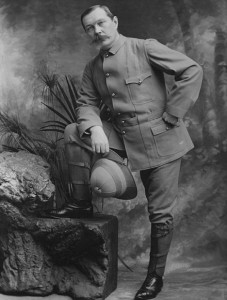 circa 1900: British writer Sir Arthur Conan Doyle (1859 – 1930), creator of Sherlock Holmes. Doyle studied medicine at Edinburgh University and practised as a physician during the 2nd Boer War. He started publishing short stories in 1879 while working as a doctor in Southsea. The Sherlock Holmes stories were serialised in ‘The Strand’ magazine and proved so popular that Doyle felt pressurized to revive the character after the detective had plunged to his death over a waterfall. (Photo by London Stereoscopic Company/Getty Images)