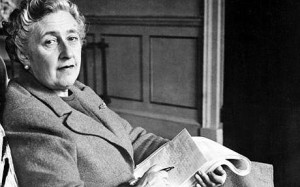 (FILES) This picture taken in March 1946…(FILES) This picture taken in March 1946 shows English writer Agatha Christie, in her home, Greenway House, in Devonshire. Thirty years after her death on January 12, 1976, British linguistics experts reckon they have solved part of the puzzle as to how she came to sell an estimated two billion books worldwide. Agatha Christie, born Miller (1890-1976) in Torquay, Devon, wrote, under the surname of her fist husband Colonel Archibald Christie (divorced in 1928) more than 70 detective novels featuring the Belgian detective, Hercule Poirot, or the inquiring village lady, Miss Marple. In 1930, Christie married Max E. L. Mallowan (1904-1978; knighted in 1968), professor of archaeology at London University (1947-78), with whom she travelled on several expeditions. Several of her stories have become popular films, such as “Murder on the Orient Express” (1974) and “Death on the Nile (1978). Christie was made a dame in 1971.
(Photo credit should read -/AFP/Getty Images)